You can’t teach an old dog new tricks, but apparently, listing an older cryptocurrency on a new exchange can bring back memories of the cryptocurrency bull market that once was.

An altcoin being listed on Binance has resulted in nearly a 100% intraday pump – something that hasn’t been seen since crypto prices and exuberance peaked in early 2018.

During the 2017 crypto bull market, it wasn’t uncommon to see some cryptocurrency assets – namely altcoins – rise by over 100% or more in a single day.

Some rallies were driven by organic FOMO buying, while others were simply pump and dump groups manipulating prices to their advantage. More commonly, when a coin was suddenly listed on a new cryptocurrency exchange, prices soared.

Whatever was the case, these sorts of shocking intraday pumps have all but disappeared. Among the first examples of this, was when XRP, also known as Ripple, was listed on Coinbase.

Just the rumor of the coin being listed on the platform in late 2017 helped XRP to skyrocket by over 900% to its all-time high of $3.50. When the coin was finally listed on Coinbase, it immediately dumped and has been setting low after low ever since.

However, an older altcoin suddenly being listed on Binance today, caused the asset to rise by nearly 100% in a single day on the USD trading pair, providing what might be the first glimpse into the next bull market. 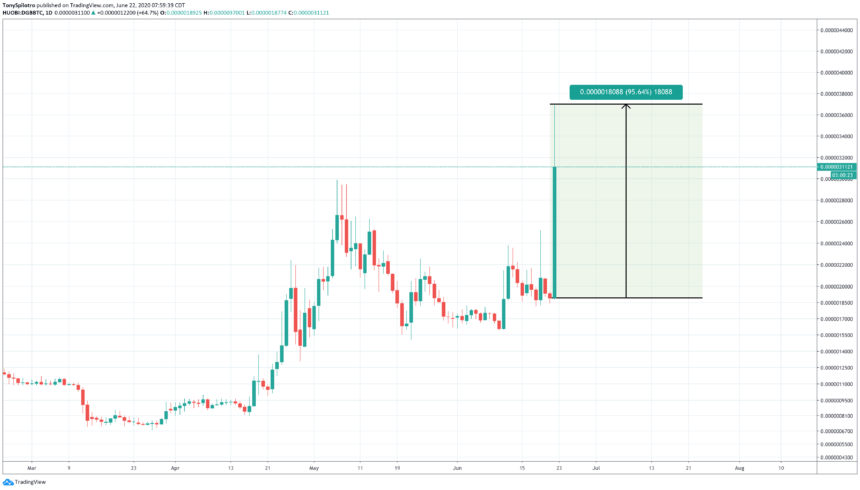 Digibyte token has been around since 2013, reaching a peak of 13 cents at the height of the crypto hype bubble. At its low, prices returned to just a fraction of a penny.

Prices are now trading at over $0.02 per DGB token, however, it’s on the BTC trading pair where the real magic happened.

Following Binance listing the asset, Digibyte token went on a powerful 95% rally in a single daily candle. Profit-taking kicked in quickly, cutting the intraday rally to just 47% as of the time of this writing.

Although much of the rally was already erased, the fact that crypto assets are once again booming on news of nothing more than being listed on a new cryptocurrency exchange is a positive sign that a bull market may be returning to cryptocurrency.

According to some analysts, making money this time around won’t come quite as easily. But if more altcoins pump just due to a cryptocurrency exchange listing, easy money may be right around the corner.

Bill would prohibit North Dakota businesses from turning down cash