Are Altcoins Headed To Zero?

Bitcoin is up well over 50% year to date, but altcoins have beaten out the first-ever cryptocurrency in 2020. Etheruem, for example, has tripled compared to the number one cryptocurrency, and several others hare outperformed by even more.

But there are five, powerful high timeframe signals that could be suggesting that BTC dominance has bottomed, and altcoins are in for annihilation in the days ahead.

Bitcoin Dominance Signals Bottom Is In, Are Altcoins Doomed?

It is difficult to imagine, given just how strong altcoins have been performing in 2020. On the heels of the DeFi explosion, nearly all altcoins are up significantly year-to-date. The recent rally has brought the total crypto market cap back to pre-bear market levels.

The lower down the top 100 list of crypto assets, the gains get even more sizable, showing just how even a little capital flowing into illiquid crypto assets can move the needle.

It has got outsiders searching feverishly on Google to find out how to “buy crypto” and crypto insiders are speculating on worthless coins once again, just like the bubble of 2017.

But just like that bubble, after altcoins surged against Bitcoin, BTC dominance bottomed, things reversed, and alts plummeted. And just like 2019, Bitcoin rising higher also has the side effect of crushing alts.

BTC dominance, however, may imply that regardless of if Bitcoin moves up or down, things could soon get back for altcoins. Here are five prominent, high timeframe signals that suggest alt season is about to end, possibly for good.

From Hero To Zero: Five Ominous Signals That Alt Season Has Ended

Markets are cyclical, and as Bitcoin has shown, crypto is no different. And because Bitcoin recovered in the past and went on to new highs, investors are watching altcoins to do the same thing.

But what if there’s no need for altcoins at all, and as several top industry analysts claim, they will all eventually go to zero? Zero is improbable, however, if BTC dominance has bottomed at 60%, then alts are in for a rough time. 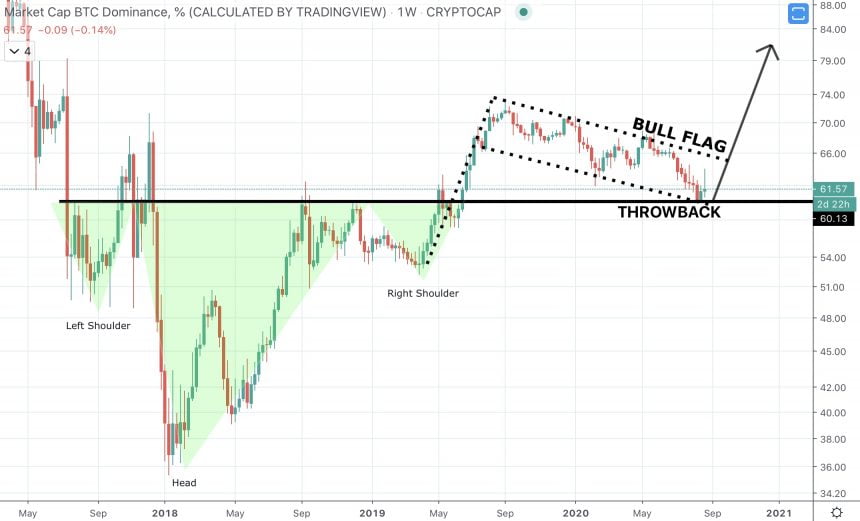 The price action on BTC.D charts from 2017 through 2019, formed what appears to be a massive inverse head and shoulders – a bottom reversal pattern. After an inial impulse after breaking through resistance at 60% dominance, BTC.D peaked at 73%. Since then, its been on a steady downtrend, now resting on that former resistance turned support.

Retests of this kind aren’t uncommon. Confirming this resistance as support would send a signal to traders that its time to move higher. It also is equally common for inverse head and shoulders patterns, to return to the breakout for a “throwback.” The recent downtrend could be the throwback before the real move higher begins. Such a move would all but eliminate altcoins, taking BTC.D closer to 90% dominance against the rest of the market. Coinciding with the potential throwback, confirming the resistance flip to support, is the weekly BTC.D stochastic reaching a point that in the past has signaled a bottom. BTC.D also fell to the bottom of the Bollinger Bands, after riding a breakout of the bands down to 60% dominance. After touching that support, dominance has been rising. After an asset closed back withing the Bollinger Bands, a move to the opposite band is probable. Past examples of BTC.D touching the bottom band, quickly rebounding to the top band. Next, the monthly Ichimoku shows a retest of the bottom of cloud support. The cloud, or Kumo, acts as support or resistance, and widens depending on volatitly. BTC.D monthly holding at such a critical line on high timeframes, could indicate that dominance won’t go any lower. But the movement in the metric didn’t match the strength highlighted by the indicator, signaling an enormous bearish divergence. A second bearish divergence also formed, extending across each subsequent bottom. Eventually, dominance reversed, and here we are at a crossroads.

Does dominance fall further and altcoins shine, or are these signals enough to put a bottom in on dominance and end to alt season?

In China, most blockchain R&D funds are going toward this segment