The Crypto Fear & Greed Index has been above 70 for the entirety of August, with the same showing an “extreme greed” reading of 78, despite the latest dip in Bitcoin’s price. Simply put, the crypto-market continues to remain bullish. This was the case with respect to many of the market’s altcoins as well as while Cardano was trading near an important zone, BAT was surging. Further, Crypto.com Coin was making its way into the top-10 with the possibility of higher highs in the near-term 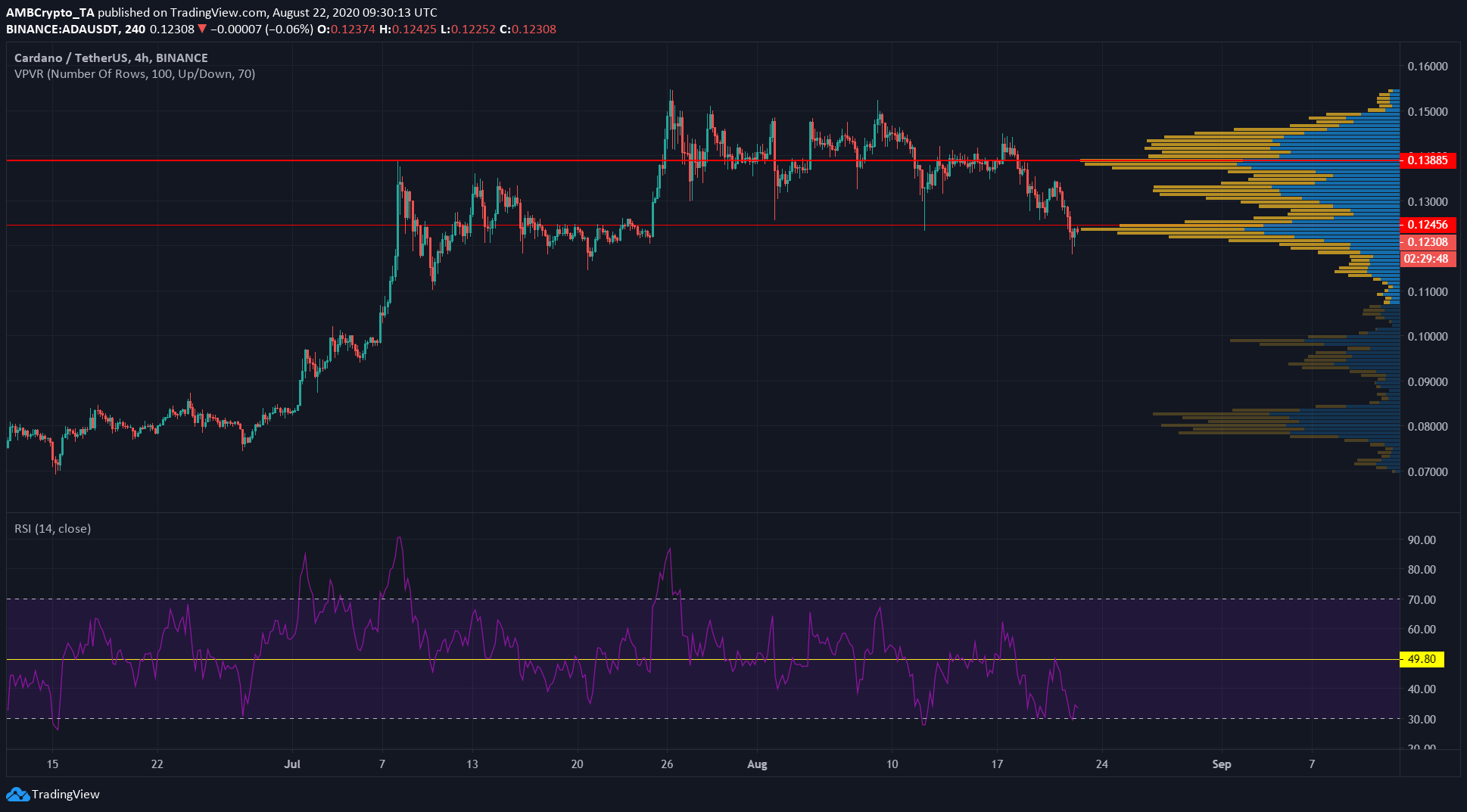 Ranked 9th by CoinMarketCap, Cardano has seen many developments recently such as the Daedalus Flight release. The rapid pace of development in the Cardano ecosystem, especially over the last few months, has been welcomed by most, with many quite bullish on the crypto.

After almost three weeks of consolidation, ADA seemed to have decided to move south. This might have been forced by the recent dip in Bitcoin’s price, following which many major altcoins dropped in value too.

As highlighted by Volume Profile, the important levels were $0.138 and $0.124, while ADA was trading at $0.123, at the time of writing. Yet another breach of this price level over the last 45 days will be hugely significant.

ADA can defend the level at $0.124 or it can slide to $0.15. Further, the RSI’s failure to breach the neutral level of 50 was indicative of a bearish trend, but ADA might yet show strength at the important level it was trading at. 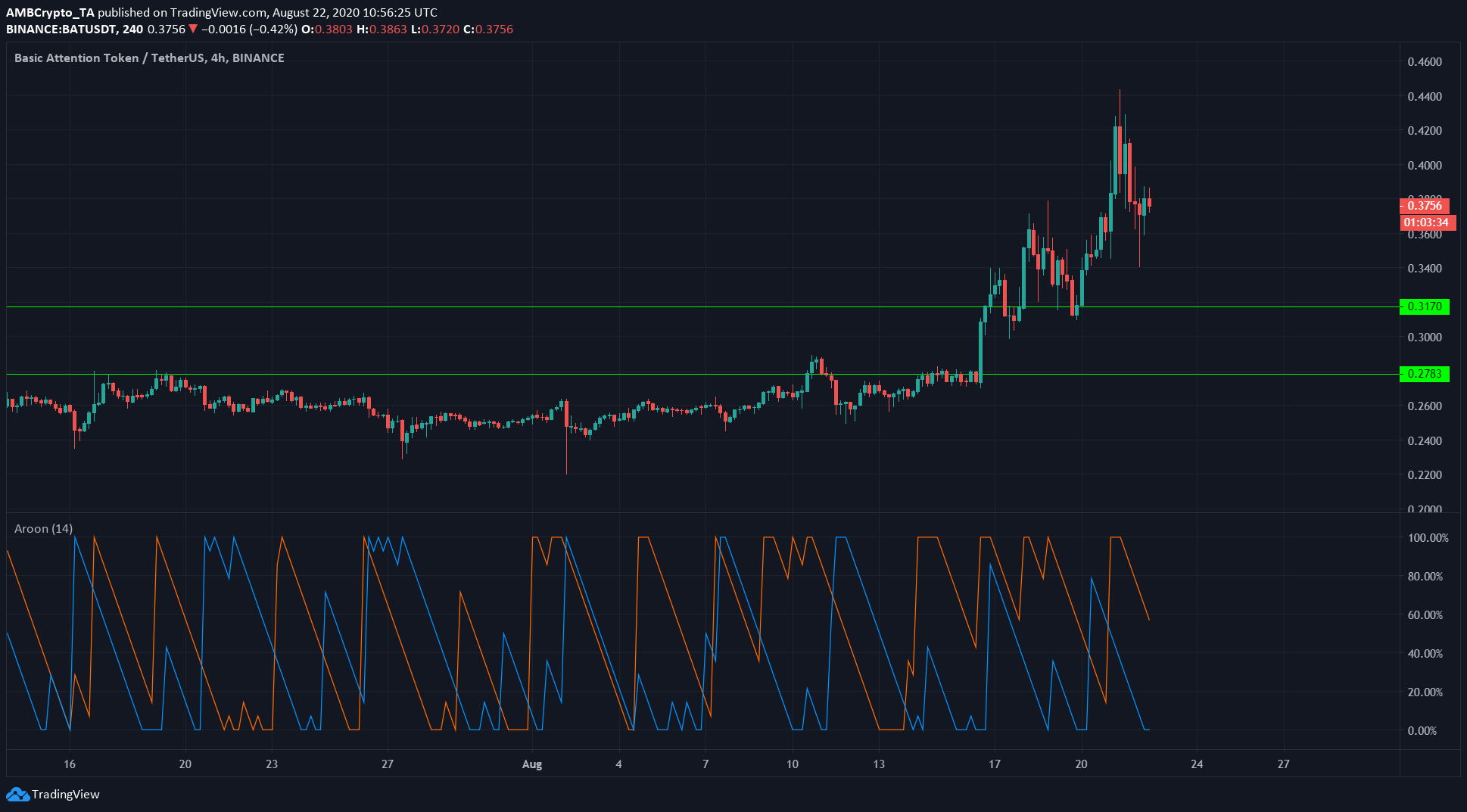 BAT was stuck in a specific range from June through August, before registering nearly 50% in gains to climb to its local high. The surge continued after a few red candles, with BAT’s price trading above its historical resistance turned support at $0.36.

The Aroon indicator suggested that the uptrend still had legs. In fact, Aroon Up did not form a crossover with Aroon Down, with the continuing uptrend underlined by the Aroon Up line maintaining a value above 50.

At the time of writing, Basic Attention Token was ranked 32nd with a market cap of $543 million. 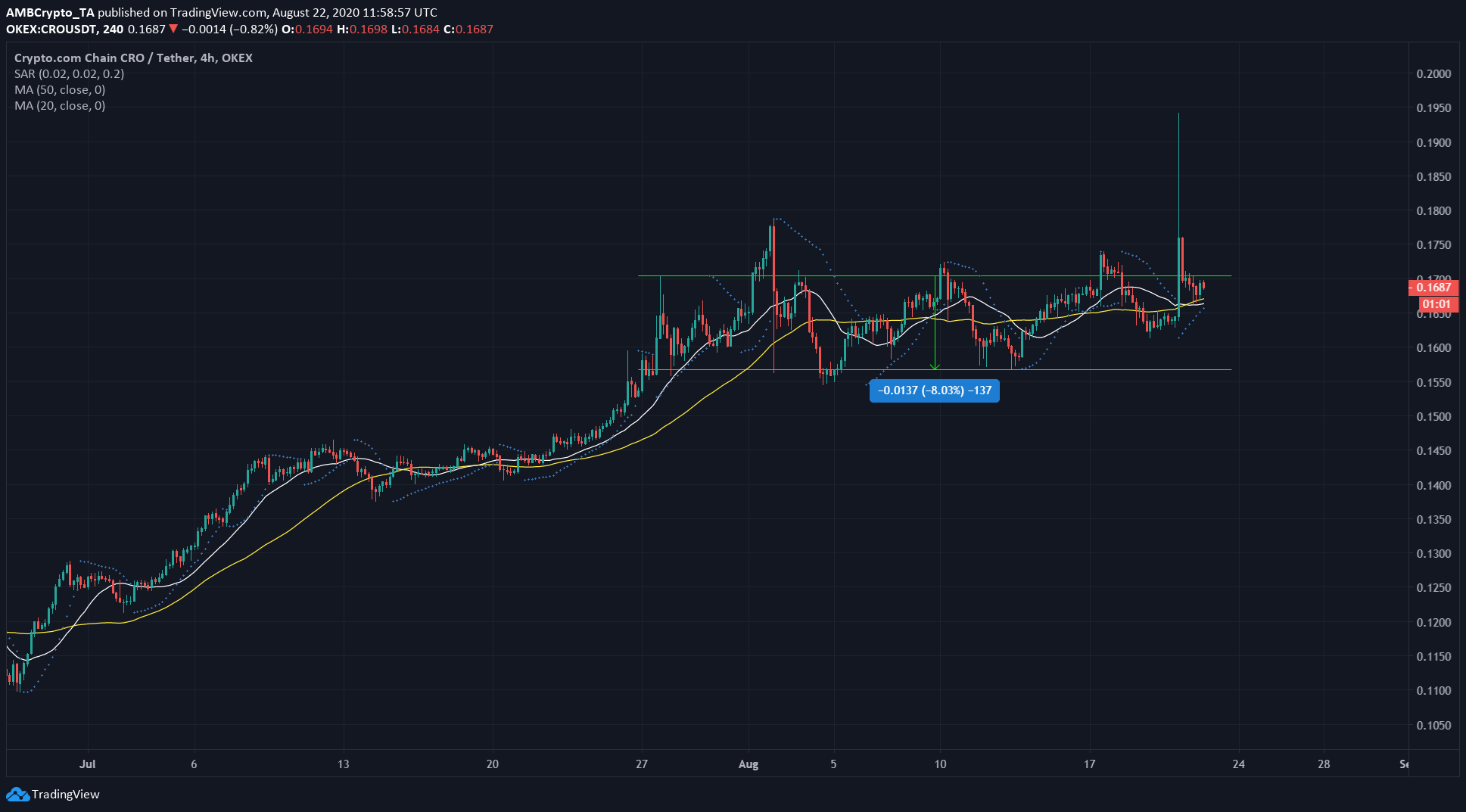 After its relentless uptrend from March, a time when its price was near $0.031, Crypto.com Coin [CRO] has quadrupled in price since. The latest entrant to the top-10 list on CMC had a market cap of  $3.2 billion, with a daily trading volume of $119 million, significantly higher than the figures noted over the rest of the month.

Since the last week of July, CRO could be seen registering range-bound price action within $0.17 and $0.155, with a few isolated candles above the range. Trading near the zenith of the range, CRO could drop to find support at $0.155. However, it might also decide to break out on the charts.

At the time of writing, the 20 SMA (white) had crossed beneath the 50 SMA (yellow), pointing to a possible bearish short-term price action. However, the Parabolic SAR did not give any sell signals.

In conclusion, some more time could be needed before CRO decides to break out, or it could get rejected at a higher range.