Binance has launched its own mining pool. This could spell bad news for miners, but probably not for the reason you’re thinking of. We’re all aware that Binance is continuing to extend its reach across the industry. The exchange’s purchase of CoinMarketCap for a reported $400 million signaled a bold step toward grabbing attention at the top of the crypto funnel, and its recent foray into mining just ahead of the 2020 halving shows that Binance is also interested in having influence at the source.

By all accounts, the company culture at Binance appears to be one of innovation and experimentation. CEO Changpeng Zhao is known to be approachable, and when good ideas come from within the company, it is able to exercise its enormous user base and war chest to enter new markets.

The question is, what impact will Binance’s pool have on miners themselves?

To start with, the impact may be minimal. Binance’s initial target market will be miners who currently mine via the pools of other Chinese exchanges, such as Huobi and OKEx. There is fierce competition among those exchanges, and Binance launching a pool can be viewed through this lens. Binance even recruited directly from within Huobi as well as Bitmain to build its own pool’s business development team.

It’s still early days, but the change in global hashrate distribution since Binance launched their pool tells the same story. Both Huobi and OKEx have lost a couple of percentage points of share in global hashrate. OKExPool and Huobi fell from 6.74% and 5.92%, respectively in April 2020 to 4.5% and 4.0% at the start of May, while Binance has attracted 4.5% of the network’s hashrate since launch. 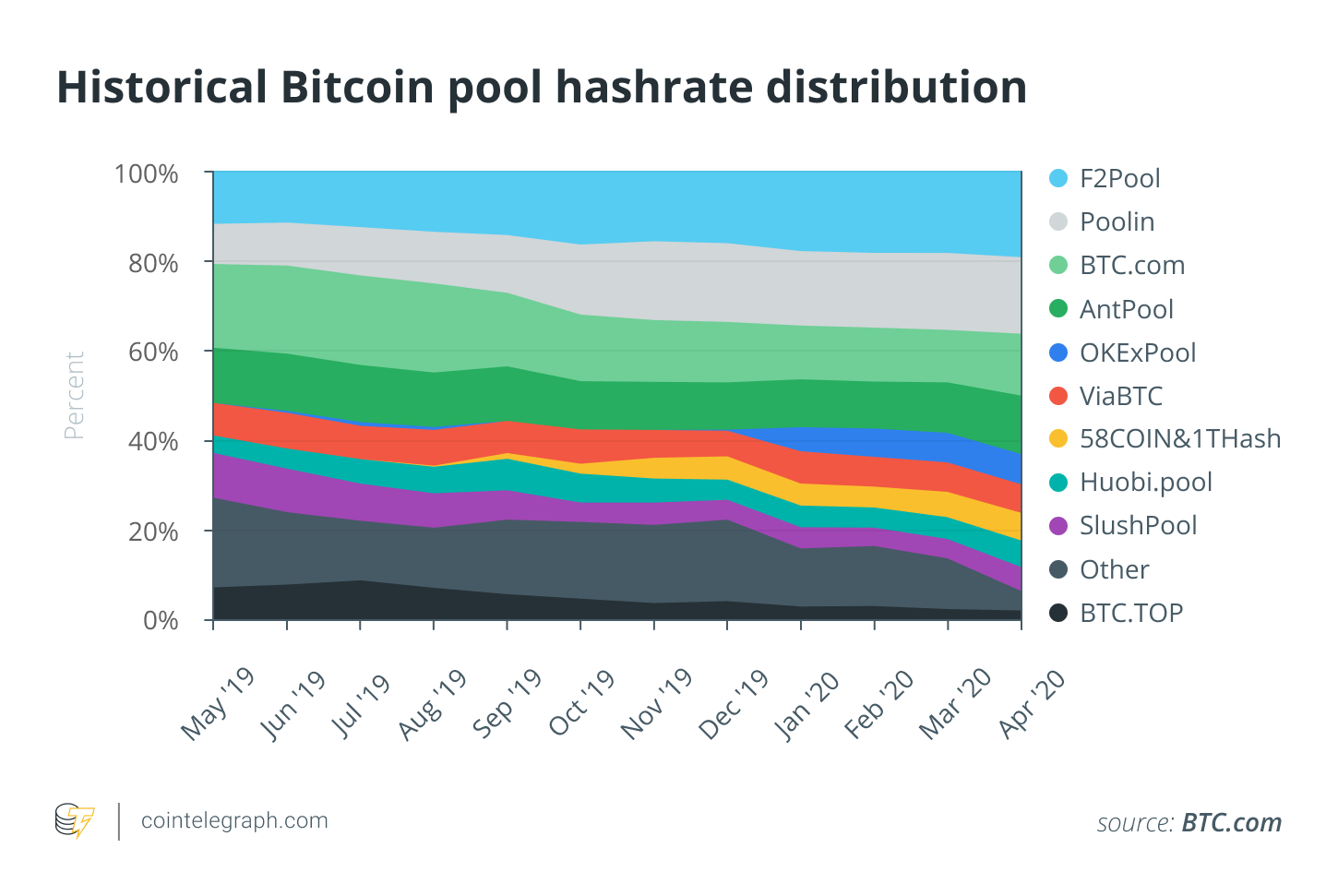 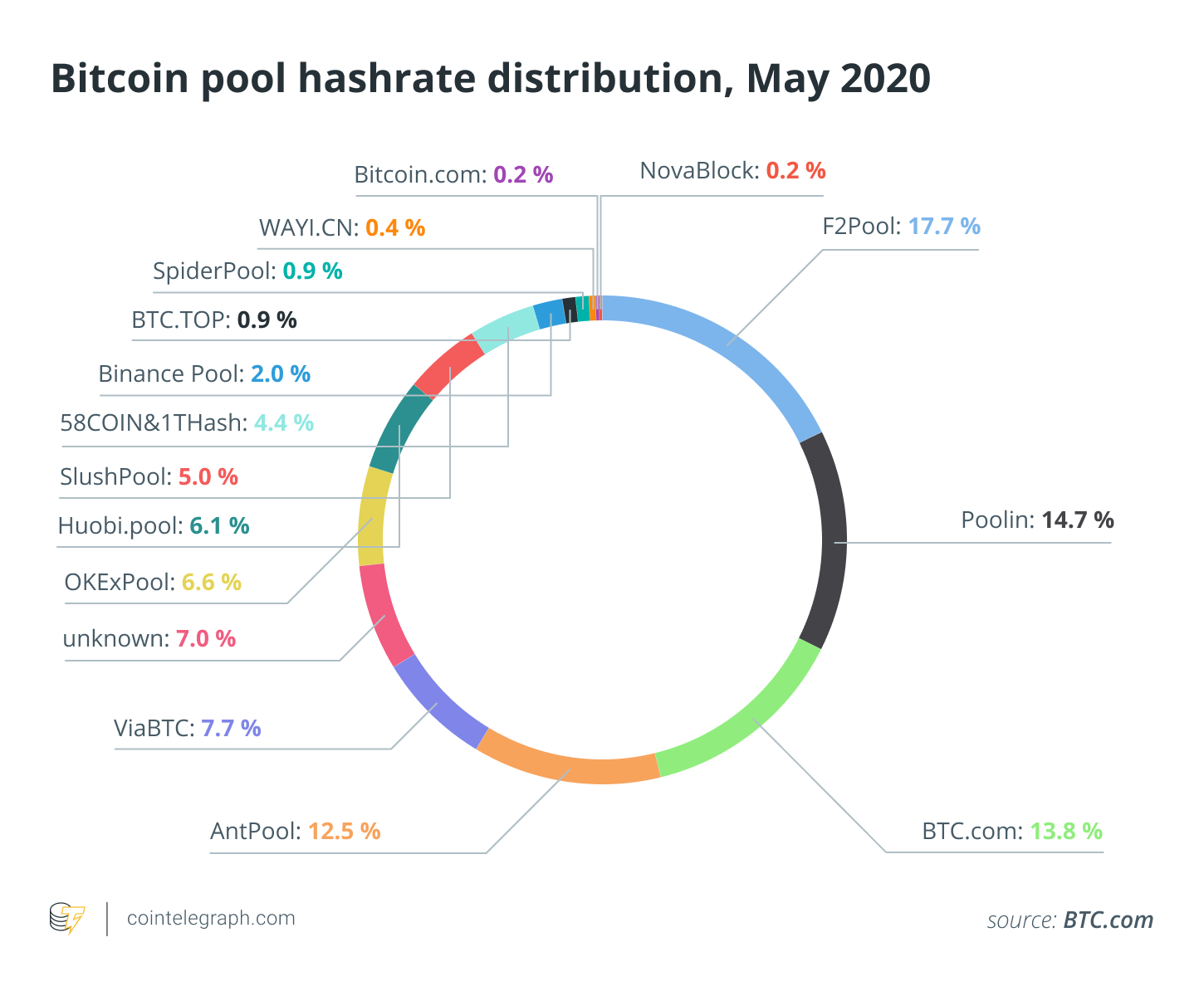 Meanwhile, established mining pools such as F2Pool and SlushPool have seen a growth in their share of hashrate during the same period.

Up until now, Huobi and OKEx have predominantly used their pools as a way to attract exchange customers and support the services already on offer. While the older pools compete in a different way.

Exchanges have massive reserves of Bitcoin and other liquid assets. They can operate at a loss, or close to cost, for extended periods of time.

Edward Evenson from SlushPool and Ethan Vera from Luxor recently discussed this short-term advantage on the mining pool-focused HASHR8 Podcast. They posited that Binance’s pool will be used as a loss leader because it can afford to drive prices into the ground. As Edward Evenson, director of business development at SlushPool, said:

“When you have 80,000 BTC on reserve, it becomes pretty easy to do whatever you want, especially when you’re vertically integrated across a bunch of different sectors of the industry.”

Another reason why Binance may be focused on the Chinese mining market is that the majority of their team, their base and their connections are still mostly in China. It also makes good business sense: 65% to 70% of the global hashrate is in China.

My concerns about this are not the typical narratives of over-centralization in China, as were recently expressed by Philip Salter from Genesis Mining. Indeed, as with the lessons everybody can learn from how Genesis handled their customers’ hashrate during the 2018 bear market, it’s much more important to focus on how you treat miners than where your company is based.

I’m of an opinion similar to my Australian colleague, Thomas Heller — global business director at F2Pool — who was also part of the debate on the HASHR8 Podcast. He underlined:

“The people who launched Bitcoin companies in Asia, such as pools or manufacturers, are Bitcoiners. They’re no different to Bitcoiners in Europe, North America or elsewhere.”

Bitcoin mining and the real threat

Centralization is not a direct function of geographic location. Bitcoin doesn’t have a nationality, and pools don’t need to be labeled that way, either. As well as the increased development of farms in North America, large mining operators own and run machines in China, Russia, Kazakhstan and anywhere else with an abundance of low-cost energy — regardless of where the operators call home.

The fundamental risks in China are outside the control of Bitcoiners, and it makes sense for everyone who wants to profit from contributing to the security of Bitcoin try to find ways to not be dependent on single points of failure. Economic factors such as the proliferation of hardware manufacturers and the logistical benefits of mining without having to export the machines halfway around the world will continue to support a disproportionate level of mining activity in that region.

Bitcoin mining is a permissionless, antifragile system where the barriers to entry are low-cost electricity and access to efficient hardware.

The future success of SBI’s focus on supplying hardware for large North American mining operations, or the potential entrance of even more well-equipped manufacturers like Samsung could change the mining landscape reasonably quickly. As low as electricity prices are in China now due to the lasting wet season, not even they can compete with some of the opportunities being explored by the likes of the Peter Theil-backed Texan’s Layer One or Greenidge Generation in New York.

So the threat that Binance poses is not geographic. The real threat is whether this crypto behemoth will drag down the circular economy that currently exists for the established pools. SlushPool is the oldest pool, and it spends a large portion of its resources developing proposals such as Stratum V2. F2Pool had a loud voice in the SegWit 2x debates, and history suggests its founders came down on the right side of the argument. These kinds of pools make their profits by building up a reputation and experience in mining Bitcoin.

The real risk is Binance turning mining into a short-term game where the only rules are how low you can offer fees. What will be the consequence if pools focusing on the long-term success of their miners get squeezed out? As with everything within the beautiful game that Satoshi created: The market will decide.

The views, thoughts and opinions expressed here are the author’s alone and do not necessarily reflect or represent the views and opinions of Cointelegraph.

Malcolm Cannon is the head of communications at F2Pool, which has been proudly securing Bitcoin and other proof-of-work blockchains since 2013. As one of the oldest mining pools, F2Pool is busy decentralizing its team and infrastructure. Cannon currently lives in Berlin, where he spent the past seven years leading startup growth teams through successful Seed and Series A fundraising rounds.

Letter: Mission nurses’ victory will ripple across the South

As Businesses Embrace Sustainability, a Pathway to Economic Reset Emerges

PRESS RELEASE: Payments and Banking in Australia: From Coins to Cryptocurrency