In a recent tweet, Timothy Peterson has predicted that Bitcoin’s price will once again revisit the $10,000 level in 49 days. Mr. Peterson is an Investment Manager at Cane Island Alternative Advisors and his prediction is linked to Tone Vays analysis that Bitcoin will continue to oscillate between $6,000 and $10,000 for the rest of the year. Additionally, his price prediction of Bitcoin is based on Metcalfe’s law. Mr. Peterson made the prediction of a $10,000 Bitcoin via the following tweet.

#Bitcoin #10KCountdown is inspired by this price prediction from a popular (but not knowledgeable) bitcoiner. Using Metcalfe’s law, I will show how predictable bitcoin’s price is (within statistical margins). We’re 49 days away. pic.twitter.com/VBnvNzsB0i

What is Metcalfe’s Law?

Metcalfe’s law is commonly used in the telecommunication industry and states that the effect of a telecoms network is proportional to the square of the number of connected users of the system.

However, the law has since found additional use in analyzing Bitcoin through its BTC network. In this case, Metcalfe’s law is adjusted for the creation/mining of new BTC over time and uses three datasets: wallets, number of BTC mined and Bitcoin price.

Timothy Peterson has further expanded on the use of Metcalfe’s law to analyze Bitcoin through a research paper titled ‘Metcalfe’s law as a Model for Bitcoin’s Value’.

Bitcoin is Once Again Struggling to Maintain the $9,000 Support Zone

At the time of writing this, Bitcoin has experienced a significant drop in value from around $9,260 to $9,024 in approximately one hour. The King of Crypto is once again testing the crucial support zone of $9,050 – $9,000. Checking the daily BTC/USDT chart once again, Bitcoin is still providing a mixed bag of signals and is still in a no-trade zone 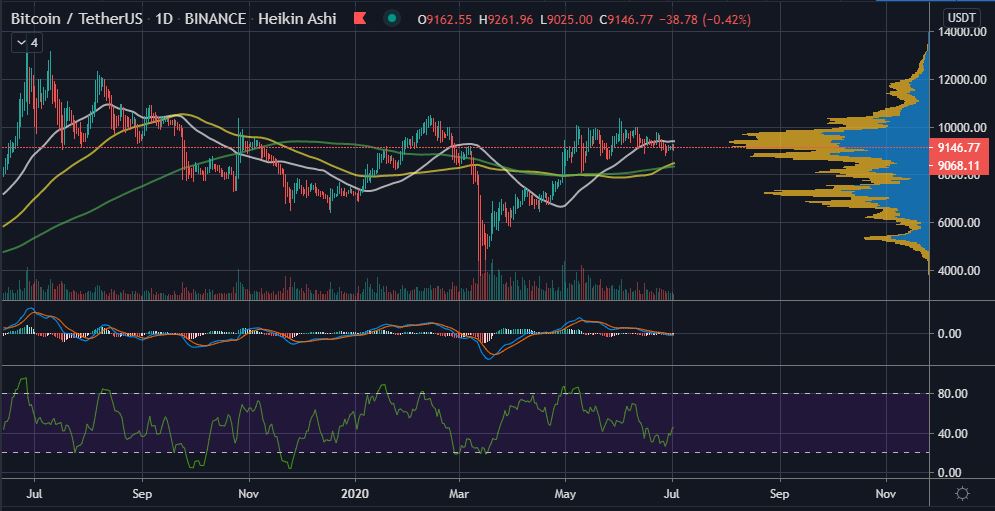 Taking a closer look at the daily BTC/USDT chart, the following can be observed.

In conclusion, Timothy Peterson has predicted that Bitcoin will retest $10,000 in the next 49 days. His prediction uses Metcalfe’s law and means that BTC has until the 20th of August to return to bullish territory. Furthermore, his analysis is inspired by Tone Vays’ view that Bitcoin will remain under $10,000 for the rest of 2020.

At the time of writing this, Bitcoin has experienced a $200 drop and is relying heavily on the $9,000 support zone to avoid further losses.

As with all analyses of Bitcoin, traders and investors are advised to do their own research as well as use risk management techniques which include stop losses and low leverage during uncertain times. Alternatively, taking a ‘wait and see’ approach might also be beneficial given Bitcoin’s current unclear price movement.