A bearish chart formation has appeared on Bitcoin dominance that could lead to another leg down and rebound in altcoin/BTC pairs. However, the 58% level could remain a barrier, keeping a full-blown altcoin season from occurring for quite some time longer.

BTC dominance is a metric that weighs Bitcoin’s market cap against the rest of the cryptocurrency space. It not only can act as an indicator as to the health of Bitcoin and altcoins separately, but it also can be used to predict when any deviations between the two types of crypto assets are occurring.

The two types of crypto assets are sometimes tightly correlated, while other times when Bitcoin pumps, altcoins dump hard.

Altcoins have been struggling to recover ground lost against Bitcoin in 2019. The first-ever cryptocurrency went on a parabolic rally, while altcoins were decimated due to regulatory uncertainty and negative sentiment. 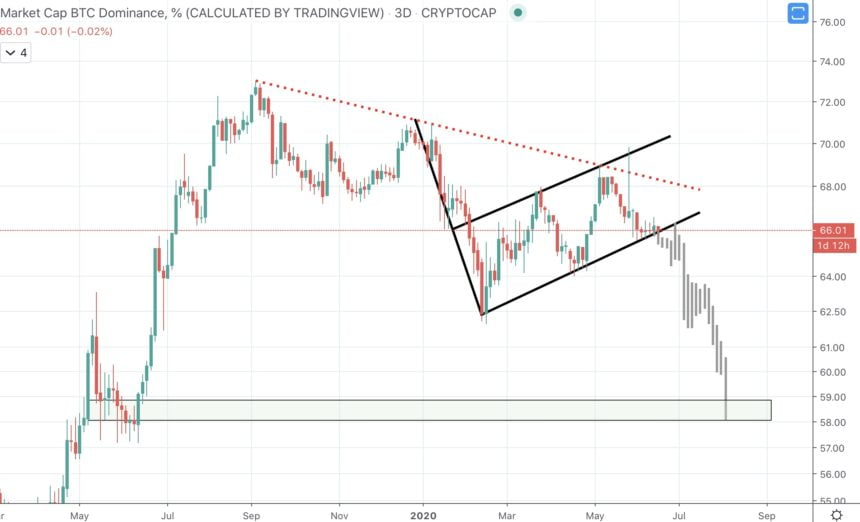 BTC dominance topped out nearly one year ago and has been on a steady decline since. Recently, two small timeframe rallies made it look like altcoins would bleed further, but the price action has since formed a bear flag on the 3-day timeframe.

Bear flag target measurements take the length of the initial flagpole and add it to the breakout of the trendline. According to the price action, this would send BTC dominance to the 58% level.

Price action reaching the 58% level in BTC.D has always resulted in a strong reaction. Breaking through that support level in 2017, led to the lowest point in BTC.D history, at 35%.

A bounce at that low sent BTC.D back to the 58% level, and after some consolidation, a breakout of support turned resistance sent BTC.D to 73% at the local high. 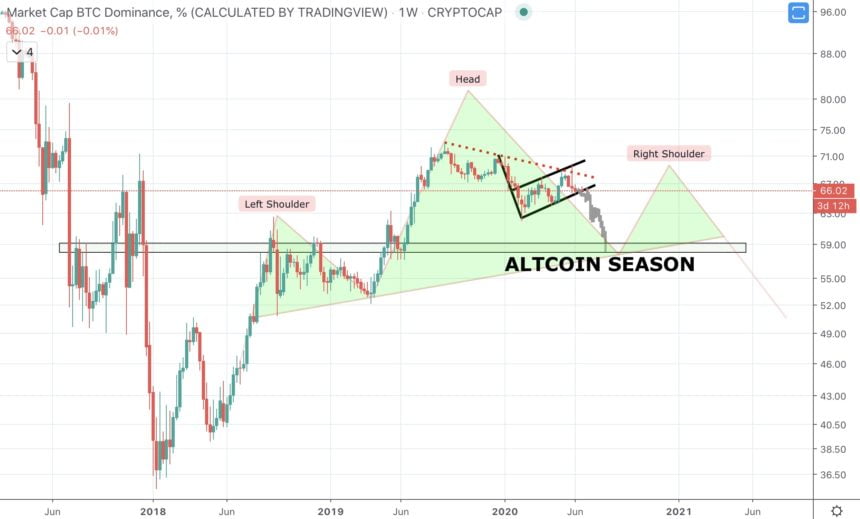 If the bear flag takes BTC.D back down to the clearly important level, another reaction may occur. After nearly two years, a return to the level could cause a short-lived bounce. Another fall from there would form the right shoulder in a massive, multi-year inverse head and shoulders chart pattern.

A breakdown of this bearish structure would lead to a guaranteed altcoin season. Altcoins would soar against BTC on their trading pairs as a result.

And if any new altcoin season is anything like last time, it wasn’t uncommon for these assets to go on rallies of a thousand percent or more against the first-ever cryptocurrency.