In 10 days, the digital asset industry is bidding its farewell to Q2 2020 and, after a disastrous Q1, Q2 was fairly positive. According to Skew charts, Bitcoin is on its way to register approximately 44 percent in positive quarterly returns. However, Arcane underlined a peculiar statistic going into the final days of the quarter.

According to Arcane’s weekly update, quarterly BTC futures contracts for June were incurring similar premium rates on both the institutional and retail-focus platforms. 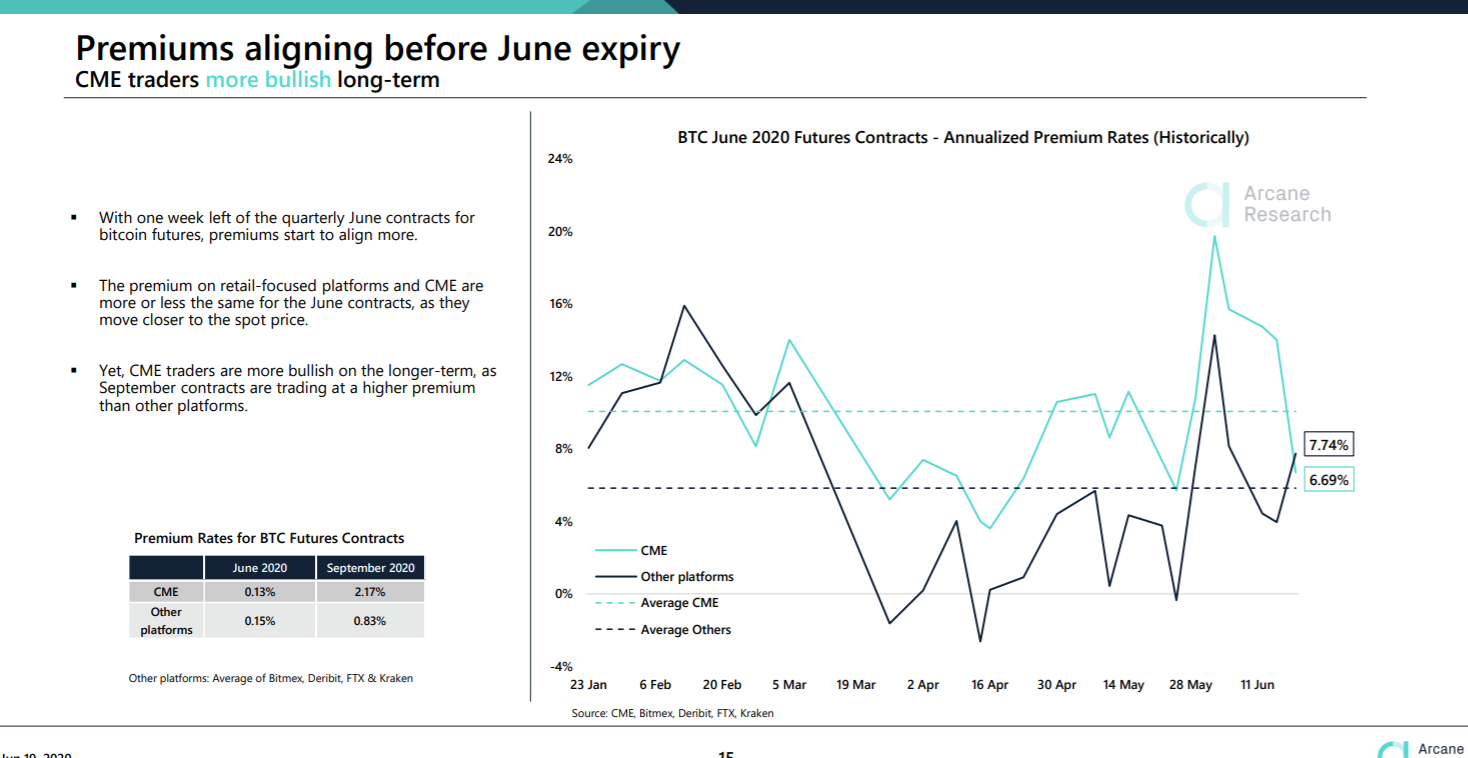 CME Futures contracts exhibited a premium of 6.69 percent whereas other retail-focused platforms such as BitMEX, Kraken, Deribit, and FTX indicated an average of 7.74 percent premium.

The sudden alignment in June 2020 is rather surprising, considering the continuous premium tussle between CME and the other retail exchanges.

Before the March market crash, Retail-exchanges were identified to incur higher premiums than CME. However, the situation changed once the market started to recover post-March, and CME registered higher premium rates compared to retail-focus platforms.

At press time, although retail-traders were more bullish, CME investors remained bullish in the long-term with a higher premium for September’s BTC futures contracts.

Is the alignment in premium indicative of a concluding price cycle?

Although it is rare for derivatives market to impact asset valuation, the current stagnancy in the market may hint at the trajectory the coin may take.

As Q2 nears an end, it is quite possible Bitcoin may have reached the end of its bullish cycle that was sustained from the beginning of April. Many analysts in the space are speculating on a similar situation as the declining interest in futures might indicate the same as well.

However, a new price cycle may surface as early as next week for Bitcoin.

As exhibited in the chart above, bitcoin put/call open interest ratio witnessed its 14-month low in the industry, as the put-call ratio hovered between 0.40 and 0.45. A lower ratio indicated the fact that options buyers were holding more than double the amount of calls compared to puts.

Historically such periods of low put/call OI ratio have been followed by major bullish rallies and Bitcoin sustained a 43 and 63 percent this year itself after low put/call ratio.

With close to 60 percent of Bitcoin options expiring next week, which is estimated to be about $1 billion, a trend reversal could be on the line for Bitcoin as the asset heads in the 3rd quarter of 2020.