Bitcoin kissed the $10K mark goodbye this week as the cryptocurrency dropped to as low as $8,800 on Thursday, reaching the trend-line that was forming since the massive drop in March. As expected, BTC received strong support in that area, and its price quickly recovered to around $9,200, where it’s currently trading.

The dump started suddenly as Bitcoin’s price flash crashed on Bitstamp and reached $9,100 in less than a minute. Even though it recovered after that, it turned out to be an unsuccessful attempt to retake the $9,600 support level, and it was all downhill from there.

Interestingly enough, the dump took place almost immediately after 50 BTC that was mined in the first month of Bitcoin’s existence and was moved for the first time since 2009. Speculations run that this scared market participants that it may have been Satoshi Nakamoto selling his holdings.

In any case, altcoins held up very well during the downfall, and Bitcoin saw more than 1.5% of its market dominance disappear. Ethereum is up 3.5% against BTC, while other large-cap cryptocurrencies such as XRP, Tezos, and Chainlink, are also in the green.

Meanwhile, the cryptocurrency field saw some exciting developments. Binance launched a Chinese website. According to the company’s head of PR, it’s intended to help Binance further its blockchain efforts in the country. She told CryptoPotato that the site is for Binance’s Lingang Blockchain Technology and Industry Research Institute.

It’s interesting to see how the market will develop in the upcoming days and whether Bitcoin will make another attempt to claim $10,000 or if it will spiral on to the downside. 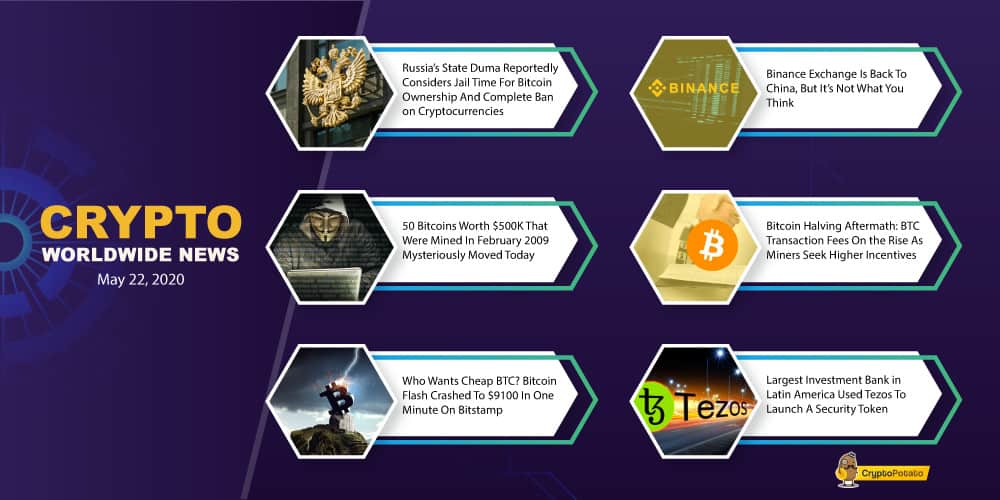 50 Bitcoins Worth $500K That Were Mined In February 2009 Mysteriously Moved Today. A very interesting Bitcoin transaction took place this week, and it brought back memories from 11 years ago. 50 BTC that were mined and held since February 2009 was moved. They were received as a block reward just a month after Bitcoin’s network was released.

Who Wants Cheap BTC? Bitcoin Flash Crashed To $9100 In One Minute On Bitstamp. Bitcoin saw a sudden flash crash on one of the most popular cryptocurrency exchanges – Bitstamp. The price went down to $9,100 in under a minute, but later on, it plummeted even further, decreasing to as low as $8,800.

Russia’s State Duma Reportedly Considers Jail Time For Bitcoin Ownership And Complete Ban on Cryptocurrencies. The Russian parliament is reportedly considering to issue a flat-out ban on cryptocurrencies. Moreover, the new regulations, if passed, will also include steep fines and even jail time for those who own Bitcoin and other digital assets.

Binance Exchange Is Back To China, But It’s Not What You Think. The world’s leading cryptocurrency exchange, Binance, has officially launched a Chinese website. CryptoPotato got a word from the company’s head of PR, who told us that the Binance.cn website is designated for its Lingang Blockchain Technology and Industry Research Institute.

Bitcoin Halving Aftermath: BTC Transaction Fees On the Rise As Miners Seek Higher Incentives. As expected, certain changes took place in Bitcoin’s network after it went through its third halving. One of the most notable was that the transaction fees increased to as much as $5.82 days after it, hinting that miners are seeking to profit on the increasing fees to make up for the slashed reward.

Largest Investment Bank in Latin America Used Tezos To Launch A Security Token. The largest investment bank in Latin America launched a security token on the Tezos blockchain. It is backed by Brazillian real-estate, and it has reportedly been used with Teos to buy 323 units of land.

This week we have a chart analysis of Bitcoin, Ethereum, Ripple, Cardano, and TFUEL – click here for the full price analysis.

Binance Futures 50 USDT FREE Voucher: Use this link to register & get 10% off fees and 50 USDT when trading 500 USDT (limited - first 200 sign-ups & exclusive to CryptoPotato).

Click here to start trading on BitMEX and receive 10% discount on fees for 6 months.