Deloitte’s latest installment of its Global Blockchain Survey indicated that blockchain technology has moved through an evolution from experimental technology to a true strategic priority for organizations.

According to the study, 39% of global respondents have incorporated blockchain into their company’s production, compared to only 23% the year prior. 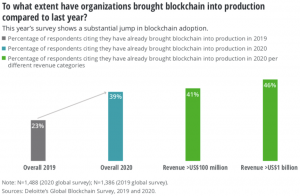 “While blockchain was once classified as a technology experiment, it now represents a true agent of change that is affecting the entire organization,” Linda Pawczuk, a leader in blockchain for Deloitte, said in a press release. “Like many disruptive technologies, it has evolved from a merely promising and potentially groundbreaking approach to a now integral solution to organizational innovation. This year’s survey suggests that blockchain is solidly entrenched in the strategic thinking of organizations across industries, sectors and applications.”

Key findings of the survey

The survey of 1,488 C-suite leaders, directors and practitioners in procurement, technology, human resources and other fields was conducted from Feb. 6 to March 3, and Deloitte recognized that this occurred just as the coronavirus crisis was hitting. The survey draws no conclusions about that disruption, but Deloitte said the findings and analysis “accurately reflect the state of blockchain technology.”

Respondents indicated that more investment and hiring would be put in place to support, build and sustain blockchain movements within companies. These findings were evident across regions throughout the world. Fifty-five percent of organizations said blockchain was a top priority, compared to 53% last year.

Among the other key findings of the survey, 83% of respondents said companies lose competitive advantage without the adoption of blockchain. Nearly 89% said digital assets will be “very” or “somewhat” important in their industries in the next three years.

“The story of blockchain in 2020 is a story of tangible, real-world implementations across large and small scales,” the study said. “But it is also a story about how blockchain affects the entire organization and makes everyone a participant in its success.”

Digital assets have a long-lasting impact

Part of the appeal of blockchain technology is the enduring sustainability of its digital assets, which now go beyond the common example of cryptocurrencies, like bitcoin. These digital assets will play a role in the future of commerce, Deloitte states.

In the study, digital assets are defined as “something represented in a digital form that has intrinsic or acquired value.” Digital assets can include everything from digital representations of land to blockchain or blockchain-like networks.

Deloitte’s survey indicated digital assets have found their footing. They can make it easier to look at an asset’s historical provenance and allow for indivisible physical assets to become divisible and be traded easily on secondary markets. In fact, 83% of respondents believe digital assets will serve as a strong alternative to, or an outright replacement of, fiat currency in the next 5 to 10 years.

Survey respondents expressed generally positive sentiments toward blockchain, but it was not unanimous. Over half of respondents (54%) said that blockchain is “overhyped,” growing from 43% last year.

Issues raised include areas such as cybersecurity, global digital identity, compliance with accounting, tax and financial reporting frameworks, and the implications of the always-increasing digital asset development. The study said that while many relevant parties are working to understand and monitor these concerns, organizations and nations that don’t find a clear path might risk losing market share to others that have already addressed these concerns.

Deloitte’s 2019 blockchain survey explored the issues to consider when deciding to join others in getting the most out of blockchain collaboration with others, including competitors, in a blockchain consortium.

There were some regional differences in blockchain sentiment. While 31% of U.S. respondents said blockchain is already in production, more than double (59%) of Mainland China uses the technology. For companies in some countries and industries outside the U.S., blockchain is very much in the here and now.

In Asia Pacific, there was a strong belief in the strategic value of blockchain. Throughout Europe, blockchain is a matter of priority, although different markets have unique approaches to the technology. And in the Middle East, the United Arab Emirates have solidified themselves as the leader in the adoption of blockchain.

The study concluded that attitudes about blockchain have shifted in the last year as executives and business leaders continually implement blockchain-enabled solutions. However, the progress may not always be visible.

Ultimately, this installment of the survey found that blockchain is an integral and vital tool with cutting-edge solutions being created. Deloitte concluded that it is “confident” blockchain will only grow within the global business community in the next one to two years.