The world’s no. 1 digital coin, Bitcoin, accelerates the upside and looks to the $10K mark heading into the weekly closing. Ethereum and Ripple also benefit from a renewed buying wave seen across the crypto space. Bitcoin, however, outperforms the top 3 most dominantly traded digital assets. The total market capitalization of the top 20 cryptocurrencies now stands at $265.65 billion, as cited by CoinMarketCap.

The top three coins are seen extending the upbeat momentum into a fresh week, with the key technical levels to consider, as suggested by FXStreet’s Confluence Detector, are noted below. 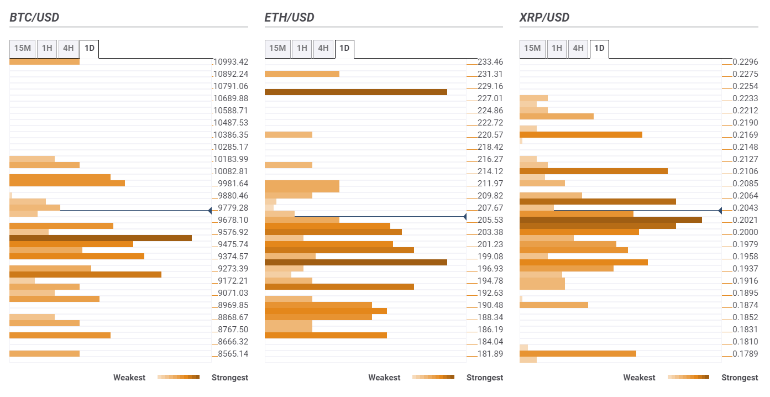 BTC/USD: Path of least resistance appears to the upside

Amid buyers snatching near-term control this Sunday, Bitcoin is likely to meet some supply near the 9980 region, the confluence of the previous week high and Pivot Point 1D R3, en route the 10K psychological level. Further up, a minor next hurdle awaits at 10082 (Pivot Point 1Month 1R).

Any follow-through buying interest could see a test of the descending channel target at 10351.

To the downside, a strong support awaits at 9475, where the Fib 23.6% 1D, previous month high and Bollinger Band 4H Middle intersect.

ETH/USD: Bulls to remain in control, with eyes on 229

With the renewed buying momentum, the ETH bulls are gearing up to conquer the 229.16 barrier, the previous month high and Pivot Point 1 Week R2, in absence of healthy resistances stacked up on its way north.

Ahead of the said hurdle, Ethereum could take out 214.86, the inverse head and shoulders pattern target mapped on the hourly chart, as explained here.

Alternatively, the immediate downside could be capped by the confluence of the SMA 100 4H, SMA 10 1H and previous high 1D, located at 203.38.

Ripple has managed to sustain the rebound above the 0.20 handle and if the spot closes Sunday above the latter, doors will open for a test of the critical resistance of 0.2064, the intersection of SMA 10 1D and Pivot Point 1D R2.

The upside remains more compelling, as any dip could likely be limited by plenty of healthy support levels, with the immediate one placed at 0.2021, the confluence of Fib 61.8% 1W, SMA 200 4H and SMA 10 1H.

See all the cryptocurrency technical levels.