What started off as an honest question by J.K Rowling about Bitcoin, has provided on of the best insight into the many hurdles of crypto and Bitcoin adoption. In a simple tweet, the critically acclaimed author of the globally known Harry Potter series requested an explanation of Bitcoin (BTC).

I don’t understand bitcoin. Please explain it to me.

Several prominent crypto personalities responded to her call and attempted to explain the digital asset to Ms. Rowling. Some of the explanations and corresponding authors of them can be found below.

It’s a digital currency. There’s ~18m units of it. It’s not backed by anything, it’s just valuable because it is, like collectibles. There’s a network of computers (which anyone can join) that maintains a decentralized global excel spreadsheet of how many coins each person has. – Vitalik Buterin

Contrary to popular belief #bitcoin is not “magic” money. We know that it can be hard to understand, so here’s a 5-minute explanation on what bitcoin really is and how it works! We hope this helps – theteam at Gemini Exchange

Bitcoin is not magic, funny money. That’s the U.S. dollar and the Fed – Tyler Winklevoss

It’s like real estate. Supply is limited and everyone wants more of it. Also it’s digital. – Udi Wertheimer

I can send you 1 #Bitcoin. Seeing is believing. – Justin Sun

The tweet by Ms. Rowling has since had thousands of replies and retweets. In one of her responses to the numerous offers to explain Bitcoin, she admitted that it all sounded like ‘blah blah blah’.

Amidst the conversation about Bitcoin, a fake account mimicking the author fooled Crypto twitter into believing that J.K Rowling had finally bought Bitcoin. 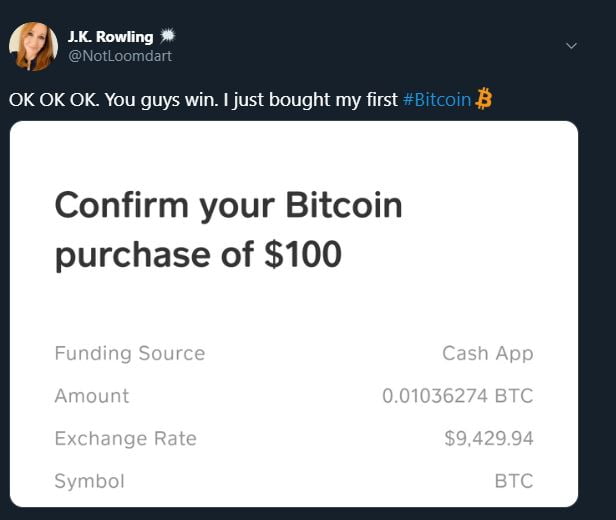 J.K Rowling Admits She Still Does Not Understand Bitcoin

Less than a day after Ms. Rowling requested an explanation on Bitcoin, she tweeted what seems to be a conclusion that she is yet to understand the digital asset.

This started as a joke, but now I’m afraid I’ll never be able to log in to Twitter again without someone getting angry I don’t own Bitcoin. One day you’ll see a wizened old woman in the street, trying to trade a Harry Potter book for a potato. Be kind. She did try to understand.

Disclaimer: This article is not meant to give financial advice. Any additional opinion herein is purely the author’s and does not represent the opinion of Ethereum World News or any of its other writers. Please carry out your own research before investing in any of the numerous cryptocurrencies available. Thank you.