Don’t Get Burned by Crypto

The crypto universe holds major wealth-building potential, but it’s also filled with landmines. Here’s how to tread carefully and get in on the gains

It wasn’t long ago when Charles Herman, at the time a 29-year-old small-business owner in Charleston, S.C., became obsessed with cryptocurrencies.

He viewed the digital coins as a way to win financially, enabling him to bypass the rat-race and live the life he wanted.

It didn’t work out that way.

After 10 months of losing in the crypto market, Herman was almost back to even, but his experience had cost him in a different way.

He had completely soured on the wealth-building promises of altcoins … and he wasn’t the only one.

From The New York Times:

Much of the anger that investors feel is toward the smaller virtual currencies, or alt coins, that entrepreneurs sold in so-called initial coin offerings. These coins were supposed to serve as payment mechanisms for new software the entrepreneurs were building.

But almost none of these companies have delivered the software they promised, leaving the tokens useless, except as speculative assets. Several coins have been exposed as outright scams.

This underscores a critical point made by Matt McCall, editor of Ultimate Crypto, to his subscribers in his update earlier this week:

If you take away one thing from this article, I hope it’s that you shouldn’t just go out and buy any altcoin and expect it to make you rich.

As with stocks, there are good cryptos and bad cryptos.

As with stocks, you need to be able to tell the difference between the two.

***This is a critical awareness as we approach the long-awaited halvening, taking place next week

As we’ve detailed here in the Digest, the halvening is an event specific to bitcoin wherein “bitcoin miners” — think, computer whizzes who solve complex computer puzzles to release new bitcoins — are rewarded for doing so with an amount of bitcoin that’s already baked into the system.

Every four years or so the reward for releasing new bitcoins is cut in half which, historically, has been a huge tailwind for bitcoin’s price.

Here’s Matt to describe how the prior halvenings have impacted bitcoin:

Crypto investors are watching closely to see what happens this time around, and bitcoin is already making a significant move.

Since its low in March, bitcoin has raced higher, up 101% as I write Friday morning: 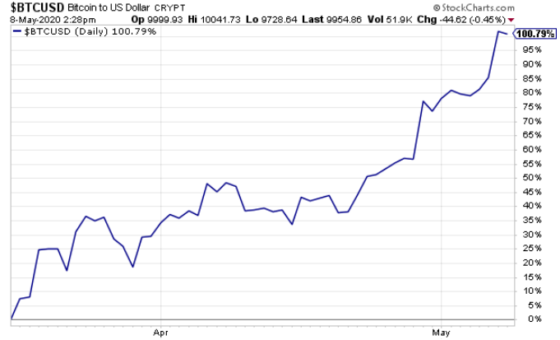 ***Historically, the halvening can lead to even bigger gains in elite altcoins … but it can also lead to dangerous imposters

As spectacular as bitcoin’s gains were, select altcoins made bitcoin’s move look like child’s play.

The key is being able to identify the best-positioned altcoins …

The challenge of differentiating between the winners and the losers is magnified in a new industry with massive potential. It’s also magnified if a technology is a little harder to understand, like biotechnology in the 1980s and cryptocurrency now.

I won’t sugarcoat it: There are plenty of dangers awaiting uninformed altcoin investors …

Altcoins represent one of the greatest investment opportunities of your life, but you need to know which ones to buy.

It was about one year ago that acclaimed economist, Nouriel Roubini, discussed less-informed investors racing into the crypto space, buying undeserving altcoins.

From his interview with the CFA Institute, speaking about the bursting of the bitcoin bubble in 2017:

Especially telling was that by the second half of 2017, there were millions of people who didn’t know anything about finance or portfolio investments, driven by ‘fear of missing out’, buying bitcoin and all these other s**tcoins.

When you see these sucker investors — in this case I call them the retail suckers — get into this FOMO frenzy, then you know this bubble is about to burst.

There’s been considerable excitement in the leadup to the halvening. So, here again, investors need to be cautious about their investments, focusing exclusively on altcoins that offer real value.

***So, how can an investor differentiate between quality altcoins and, as Roubini calls them, “s**tcoins”?

Here’s how Matt makes this distinction:

I teamed up with someone who knows the cryptocurrency market better than most people on the entire planet. Together, we created a proprietary 10-point system that grades altcoins. We identified the most important factors that predict future success and gigantic gains.

Our system analyzes everything from the size of the potential market for particular cryptos … to the strength of the team behind it … to risk and more.

Fortunately, there are some excellent opportunities out there ahead of the halvening, which is now just several days away.

In a recent update to subscribers, he explained how his system weeds out lesser-deserving investments, pointing toward a cryptocurrency called Dentacoin, which was created for the global dental industry.

That industry is just not very big compared to others, and growth in the sector is virtually non-existent. That’s why Dentacoin is down 99.9% from its 2018 high — and why it has a low MAG score.

In the last month, as our altcoins have been rising, Dentacoin is down 45%.

Bottom line: if you’re going to wade into the crypto sector today, it’s critical that you use a deliberate investment system. There are simply too many toxic imposters that can destroy your wealth.

Matt tells us this particular coin was just “uplisted” to a major crypto exchange owned by the billionaire Winklevoss brothers. This is something only bitcoin, Ethereum, and a few others have accomplished.

As to its investment potential, Matt told his readers “I believe it could soar 10-fold or more from current price levels.” You can learn more by clicking here.

But remember — these potential high-fliers are only part of the game. The other part is playing defense … avoiding the wealth-destroyers.

After all, you don’t want to be one of the many crypto “me too” investors who lost big.

Back to The New York Times, profiling a second losing crypto investor:

Mr. Roberts, the British investor who has seen most of his $23,000 vanish, is holding on to his coins in case they turn around. But for now, he has stopped trading and is looking for another job.

“I’m living off the little savings I have left still in my bank account,” Mr. Roberts said. “I’ve made a mistake, and now I’m going to have to unfortunately pay the cost for the next few years.”

Using a proven investment system like the one Matt developed can help everyone avoid that outcome.

Have a good evening,

Michael Wu delivers everything from Chinese art to Feng Shui