The municipality of Skagway moves closer to a mask mandate, small businesses will be eligible for local relief money, and the Dahl Memorial Clinic got a second ventilator. This is your Skagway Assembly recap. 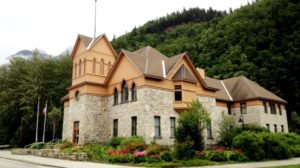 An ordinance that would require cloth face coverings in all municipal buildings, including the school, passed its first reading at a Skagway Assembly meeting on Thursday. The assembly is scheduled to make a decision on the ordinance in two weeks at the next assembly meeting.

Residents wrote dozens of letters to the assembly. Most of them supported the ordinance. A pro-mask petition that seeks to expand the ordinance to all public buildings and spaces garnered hundreds of signatures. But not all Skagway residents are in favor of mask mandates.

“I realize that I represent more of a minority. And that’s okay. We have our rights too,” said Casey Sheridan. He said he doesn’t support a mask mandate because it would infringe on civil liberties. He said businesses should be able to choose whether or not to require them, for example.

“I don’t believe it’s the place of the government to keep me safe as much as it is to maintain our freedoms. And I know there’s plenty of you that do care about this, you just see it in a different way. And I respect that.”

Among those who supported the mask ordinance there was division over whether or not the Skagway school should be included. The School Board resisted the school’s inclusion in the ordinance—it is an elected and autonomous body that already voted on masking requirements. Masks are required in the school when social distancing is not possible. Superintendent Josh Caughran said the mask mandate would obliterate school sports, which the board has planned for.

“Our plan, along with nearly every other school district in Alaska requires a liability waiver for all student athletes and parents, and addresses mitigation strategies covering practice, competition, and potential travel. Our strategies are not only consistent with guidance from the state Activities Association, most sections are verbatim… Requiring students to wear a mask in practice is both unrealistic and potentially dangerous,” he said.

Mayor Andrew Cremata clarified that the ordinance is not intended to usurp power from the school board. He says the intent is to protect the municipality and the school.

“The way that this ordinance is written is to cover one thing. And one thing only. And that is liability,” he said.

“And the reason I say that is because if the World Health Organization, the CDC, the state government and the federal government, the White House, Governor Dunleavy, Dr. Zink, and the President of the United States of America are all saying to wear a mask. And if we do not require masks in our municipal buildings, could we potentially open ourselves up to significant liability.”

The assembly passed the ordinance on to its second reading unanimously.

The assembly adopted a small business grant program for Skagway businesses impacted by the COVID-19 pandemic. It is funded with $1 million dollars of Skagway sales tax savings. The program will grant a minimum of $1,000 and a maximum of $6,000 to businesses. The program does not grant additional resources to businesses that are open year round. The Finance Committee will consider a resolution that could reduce or eliminate utilities for year round businesses later this month.

Dahl Memorial Clinic director Este Fielding gave a clinic update.  The clinic now has a second ventilator with a third on order. Fielding says the clinic is testing at capacity and beyond the state’s mandate. It brought on more test staff and is working to get another testing machine.

“Your clinic staff are exhausted, and we haven’t had any positives yet. Help us out. If you have questions call and speak with a medical provider or call in to the DHSS calls weekly with Dr. Ann Zink. Please don’t rely on opinion pieces or inflammatory means for your information,” she said.

She said just because Skagway has not identified any positive cases does not mean it is COVID-19 free.