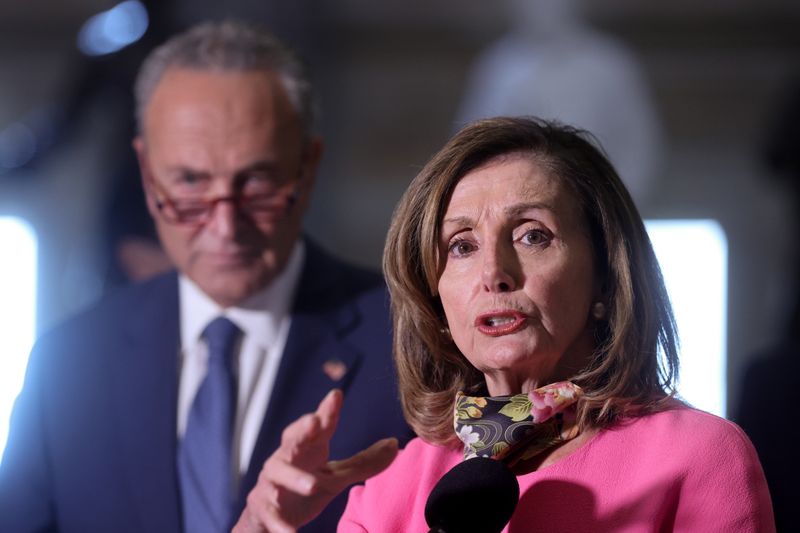 © Reuters. U.S. House Speaker Pelosi and Senate Minority Leader Chuck Schumer (D-NY) speak to reporters after their coronavirus relief negotiations with Mnuchin and Meadows at the U.S. Capitol in Washington

“Postmaster General DeJoy must quickly reverse his operational changes that have led to delays and service reductions for too many Americans and threaten to undermine our democracy,” House Speaker Nancy Pelosi and Senate Democratic leader Chuck Schumer said in a statement.

DeJoy, who has donated $2.7 million to Trump and his fellow Republicans since 2017, in July ordered operational changes and a clampdown on overtime in a bid to fix the financially troubled service.

The shakeup is leading to mail delays, union officials said on Tuesday, heightening concerns that an ally of Trump is destabilizing the service as millions of Americans consider whether to cast their ballots by mail in the Nov. 3 elections.

“House and Senate Democrats call on the President to immediately cease his assault on the Postal Service, make clear that he will allow the 2020 election to proceed without his sabotage tactics and enable the American people the same opportunity he and the First Lady requested this week to vote by absentee ballot,” the statement said.

Trump has charged, without giving evidence, that mail-in voting will lead to fraud in the elections. Experts say that fraud is rare in all types of voting.