Between free money, gas fees, community governance and market forces, UNI is hitting all the notes.

Have you used Uniswap prior to 1 September 2020? If so, every wallet you used it with has a fairly considerable reward waiting for it.

The prize is 400 UNI tokens per wallet. Each token was trading at about $3 at the time of the airdrop - slightly more now - so it was a US$1,200 windfall per wallet.

To claim your funds:

How much are these tokens really worth?

Like most DeFi food tokens, the UNI token has no intrinsic value, earns no revenue and serves no purpose other than entitling its holders to place non-binding votes on various governance proposals, or participate in opinion polls as it’s known outside the cryptosphere.

Because it’s intrinsically worthless, the market naturally can’t get enough of it. Over the last 24 hours at the time of writing, 24 hour UNI trade volume is approaching US$2 billion even as UNI prices trend upwards.

Centralised exchanges were also quick to get in on the action, with Binance, Coinbase and many more racing to list UNI on the day of its release.

Clearly people see something in it.

How much are these tokens really worth?

Many agree that UNI has the potential to be worth more than its initial $4 each.

As a decentralised exchange, Uniswap’s volume rivals some of the larger exchanges, and while there’s no guarantee of it happening, there’s also no practical reason it can’t introduce a scheme to reward token holders with a larger cut of the platform fees down the line, similar to SushiSwap.

The biggest asterisk, however, is UNI’s inflation rate and likely selling pressure.

A lot of people were just given a lot of money in UNI tokens, and many of them are taking the tokens straight to market. At the same time, many more UNI tokens are entering existence through the liquidity mining program, which will distribute a further 20 million UNI tokens over the next two months.

And that’s essentially where the token’s value stands. It’s currently worth little on paper, is potentially underpriced in practice but will likely also be subject to significant selling pressure over the next two months.

The market could also overtake the tokenomics, in either direction. Perhaps more buyers will rush to get in early because they think it’s a great deal, or maybe the idea of the liquidity mining will lead enough prospective buyers to assume prices will drop to turn it a self-fulfilling prophecy.

The arrival of UNI has changed the crypto landscape in a few ways.

Firstly, anyone who used Ethereum that day felt the impacts of UNI, even if they weren’t directly involved, as Ethereum gas prices skyrocketed at the time of the release with everyone scrambling to claim their airdrops.

In this case haste made waste though. Not only did the early comers spend more on gas, but the only real reason to rush was to try to sell the UNI ahead of the rest of the market. With UNI prices easing into the $5 range, the fastest sellers are the ones missing out. It’s quite a role reversal from the norm of the last few months, where the fastest sellers get the best prices.

As the UNI token moved gas prices on all of Ethereum, the UNI liquidity mining scheme also changed the landscape. The total value locked in DeFi, which was dipping as yields declined following the excesses of the food farming craze, has ratcheted up again now that there’s another incentive to lock funds into Uniswap liquidity pools. 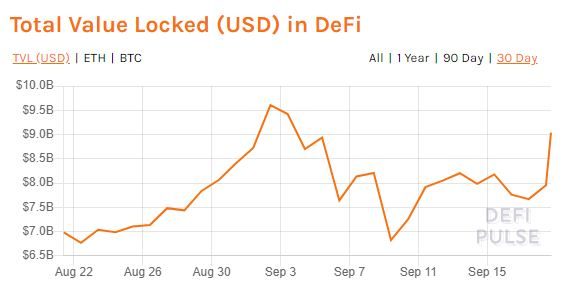 Uniswap’s novel token is also worth paying attention to. It essentially launched a surprise retroactive rewards program for its long time users, in contrast to the more typical system of trying to attract future loyal customers with a rewards scheme.

As you’d expect from a program that gives lots of people a lot of free money, it was pretty well received. While more time is needed to find out how well the transition to community governance goes, it’s quite possible we’ll see more retroactive airdrop like this in the future.

Disclosure: The author holds cryptocurrencies including LINK at the time of writing

Disclaimer:
This information should not be interpreted as an endorsement of cryptocurrency or any specific provider,
service or offering. It is not a recommendation to trade. Cryptocurrencies are speculative, complex and
involve significant risks – they are highly volatile and sensitive to secondary activity. Performance
is unpredictable and past performance is no guarantee of future performance. Consider your own
circumstances, and obtain your own advice, before relying on this information. You should also verify
the nature of any product or service (including its legal status and relevant regulatory requirements)
and consult the relevant Regulators’ websites before making any decision. Finder, or the author, may
have holdings in the cryptocurrencies discussed.

Have We Learnt Nothing? (Opinion)