Where Cryptos Go After the Halvening

Yesterday saw the long-awaited “halvening” as well as some big moves in altcoins. What happens to the sector now?

(To make sure we’re all on the same page, the halvening is an event specific to bitcoin wherein the reward to “bitcoin miners” for releasing new bitcoins is cut in half. The prior two halvenings both led to major gains in bitcoin’s price in the months surrounding the event.)

Nope. It fell about 13% as profit-takers sold after the crypto’s recent run-up.

Below is bitcoin’s chart as of yesterday afternoon, spanning the prior seven days leading up to the halvening. 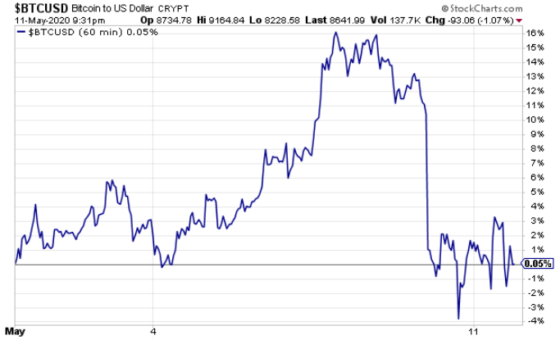 While the crypto surged 16% during the period, investors took profits over the weekend, leaving bitcoin flat on the week.

***If we look at the entire crypto universe, the last seven days witnessed some extraordinary gains and losses

As of yesterday, over the prior seven days, a small cryptocurrency called “Switch” had climbed 2,170% …

We also saw a slew of other cryptos post triple-digit returns:

Of course, there were losers as well.

In the list below, be sure to note NOIZ, at #1 — virtually wiped out in just seven days:

This wide discrepancy in fates underscores a critical point made by our crypto specialist Matt McCall, which we highlighted last week in the Digest:

If you take away one thing from this article, I hope it’s that you shouldn’t just go out and buy any altcoin and expect it to make you rich.

As with stocks, there are good cryptos and bad cryptos.

As with stocks, you need to be able to tell the difference between the two … I won’t sugarcoat it: There are plenty of dangers awaiting uninformed altcoin investors.

***Matt’s Ultimate Crypto portfolio has seen its own big gains

Last week, one of the altcoins Matt holds in his Ultimate Crypto portfolio shot up over 100%.

It’s the second of his original six altcoins to double since he started the service in January.

Now, congrats to Matt and his subscribers for these gains, but let’s back up …

On one hand, we have a select group of explosive altcoins that are climbing triple-digits in a week … on the other hand, you have altcoins like NOIZ that are all-but-obliterated in a week.

What steps can a crypto investor take to capture the high-fliers while avoiding, or diminishing, the impact of a crypto-loser?

First, as we noted last week, if you’re going to invest in cryptos, you need a deliberate system. This is not a “rising-tide-lifts-all-ships” sector.

I teamed up with someone who knows the cryptocurrency market better than most people on the entire planet. Together, we created a proprietary 10-point system that grades altcoins. We identified the most important factors that predict future success and gigantic gains.

Our system analyzes everything from the size of the potential market for particular cryptos … to the strength of the team behind it … to risk and more.

***But there’s another step crypto-investors can take — and frankly, must take — to help safeguard their wealth

Altcoins can be volatile, and the smartest long-term strategy is to buy a basket of coins and diversify risk among the best of the best.

Given the huge upside potential, there should be several big winners in the portfolio.

Nobody knows for certain which altcoins will be the biggest performers, and that’s why the best strategy is to build a portfolio of the strongest altcoins.

In a prior update, Matt explained the power of the basket approach using a hypothetical stock portfolio.

Let’s say you have twelve promising businesses — or in this case, promising altcoins. Yet, let’s be conservative and predict eight of them will decline in value, so only 33% of the picks are winners.

As to the winners, following what we’ve seen in the crypto space, let’s say that we land two big winners (in the example below, the size of these winners actually pales in comparison to the monster, quadruple-digit returns we’ve seen from more than a few altcoins).

Here’s how the returns look: 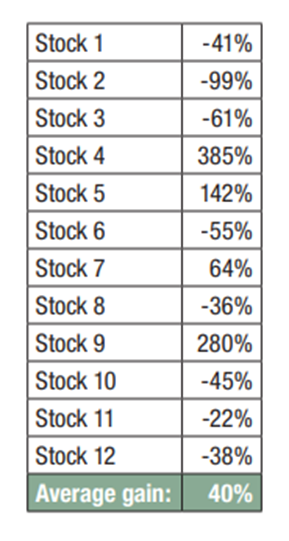 In this example, four picks went up and eight went down. We were right just one-third of the time, yet the basket approach, coupled with two outsized winners, still resulted in cumulative gains of 40%.

This is how to help protect your wealth in the crypto sector.

As I write, Matt holds 11 altcoins in his Ultimate Crypto portfolio. Despite the historical volatility in the financial markets over the past several months, the average return of the collective basket is up double-digits.

In the Digest last week, we discussed gold in light of the coming tug-of-war between inflation and deflation.

As part of that discussion, we highlighted how the U.S.’s debt-to-GDP ratio just exploded higher:

So, we have the Fed bailing out everything (increasing our national debt) at the same time our economy is shrinking (decreasing our GDP).

Put them together, and it means our debt-to-GDP ratio is going to keep climbing. I’ve read some experts suggest we’ll hit 120%, even 130%.

It turns out, we’re already dangerously close to that 120%- figure.

The below chart comes from analyst Charlie Bilello. It shows how the U.S. debt-to-GDP ratio has now hit 116%. 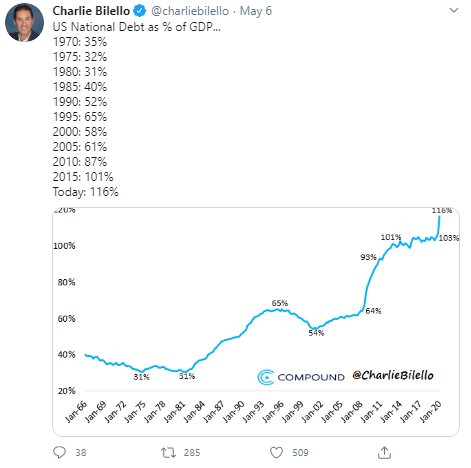 For context, according to the Congressional Budget Office, the highest prior ratio level we’ve seen was during World War II, when it peaked at 106%.

***This is a dangerous path for our nation, the U.S. dollar, and your personal wealth

The hope is this nosebleed ratio will be temporary — an unfortunate-yet-unavoidable response to the economic destruction of the Coronavirus. Yet once the economy reopens, GDP will soar and debt spending will recede, taking pressure off of this unsustainable trajectory.

However, between now and whenever that point comes, we’ll likely see yet another stimulus package from the U.S. government, which will simply push this imbalance to even more grotesque levels. And while we all hope for an explosive V-shaped economic recovery, the need for social distancing is likely to act as a speed-limiter, slowing our GDP’s recovery time more than we’d like.

So, what happens if this debt-to-GDP ratio remains distorted? Lingering well-above 100% for the foreseeable future?

The Congressional Budget Office (CBO) stated the impact of this in simple terms:

That trajectory ultimately would be unsustainable …

How long the nation could sustain such growth in federal debt is impossible to predict with any confidence.

At some point, investors would begin to doubt the government’s willingness or ability to pay its debt obligations, which would require the government to pay much higher interest costs to borrow money.

Such a fiscal crisis would present policymakers with extremely difficult choices and would probably have a substantial negative impact on the country.

This situation would be disastrous for the dollar … which is exactly why you want to hold some of your wealth outside the dollar.

***Last week, billionaire investor Paul Tudor Jones pointed toward the crypto universe as his preferred way to play potential inflation in the dollar

Billionaire investor Paul Tudor Jones made a prescient call on bullion in 2019; now he’s saying that bitcoin, the controversial digital currency, reminds him of gold in the 1970s, and may be the best hedge against inflation in the age of coronavirus.

The famed hedge-fund investor, writing in a recent research note, cited unprecedented money-printing and stimulus measures by the Federal Reserve and the U.S. government amid the COVID-19 pandemic as key reasons behind his newfound appetite for the world’s most prominent cryptocurrency.

As Matt has told his Ultimate Crypto subscribers, he’s bullish on bitcoin as well, but he believes the opportunities are even greater in elite altcoins.

Either way, getting some portion of your wealth outside the dollar is important today.

Whether you’re looking at the crypto sector for potentially huge returns or for diversifying your wealth, the takeaway is the same — top-shelf cryptos deserve a place in your portfolio today.

Have a good evening,

Blockchain in Energy Market To Observe Exponential Growth By 2020-2027